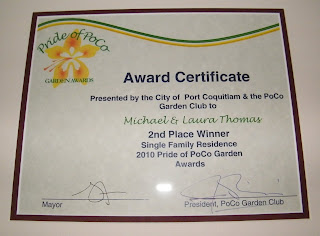 I know, there is only so much navel gazing I can stand too, but this post was unavoidable. Last night the City of Port Coquitlam held a reception for the garden award winners and their families prior to the council meeting and awards ceremony. We took the kids and the Grandma’s and had a great time. We chatted about gardens and enjoyed some tasty treats. There was a good spread of sandwiches, of which I’m told Great Grandpa Thomas would have very much approved. The apple doesn’t fall far from the tree it seems, Michael liked them too! 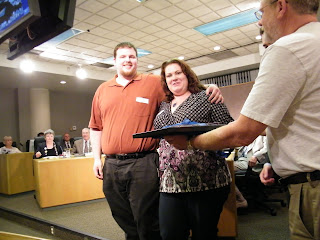 We attempted multiple ‘family’ pictures while there. Thanks to all those who I tossed a camera at! It’s a difficult thing to get the kids to look forward and smile. These were the best of the bunch, and pretty amusing at that. Really, they were standing nicely in front of us, until they both decided to go different directions! 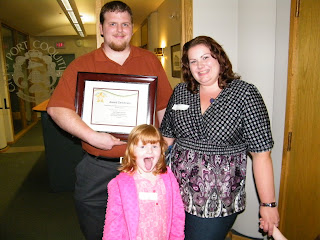 Look how proper we look in this one! Note the boy is still attached to me but also lying on the floor. Isn’t that where they are taking the picture? My daughter is doing a very good job of showing off her tongue. In fact this is the same way she greeted her new kindergarten teacher. Oh Madame LaLonde, you have so much to look forward to! Still, this one is my favorite shots! A super thanks to Jon Strocel of the V3H who stopped by to take our snap.

I met a lot of great people at the reception, including the lady involved in the school garden at Blakeburn Elementary. I hope to connect up with her again in the future. There may be a blog post or two about what they are doing at the school! I hope to be able to learn from her example. Today while walking my girl to her school I noticed that there is ample room for a school garden of their own. Yes the little wheels in my brain have been turning on this one for a while. Mwah ha ha!

This entry was posted in Giggle worthy, Port Coquitlam, Reasons why I love my Husband. Bookmark the permalink.