My crazy husband, he’s a genius!

We’ve been shed shopping as of late. This is the year of cleaning thing up and we have a lot to do. I can’t think of an area of the property more in need than the side yard. Space is limited, and as I’ve previously mentioned. This is where all the projects have gone to die.

Now this kind of mess is the type that you stare at and sigh. Where to start? Or better yet when to start? I keep saying that the side is a priority, and it is. My priority one procrastination project. How do you propel yourself out of such a stand still? Well why not buy a shed, prebuilt because there no place to put it, and that will force the project along.

We got a fabulous deal on this shed. We have been eyeing it for a sale. As luck would have it last weekend our local hardware store had a sale on all sheds. We tried to purchase it then, but there was no stock and he wouldn’t sell us the floor model. The manager promised to order one and get back to us the next day. Well let me tell you, when a manager forgets to order something, and then forgets to call you back, and then you show up a couple of days later, deals are to be had! It seems they weren’t likely to get new stock on this one for some time, and suddenly the floor model was back in play, at a highly discounted rate! I love a good deal 🙂 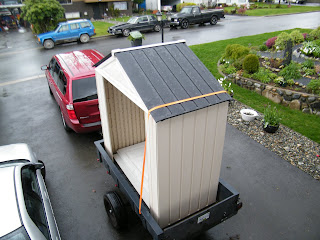 So with a shed randomly parked in our driveway, now was the time to start on that side project. So with me sick this weekend. My hero, my husband did all the heavy lifting. There was a lot of rock in that pile! 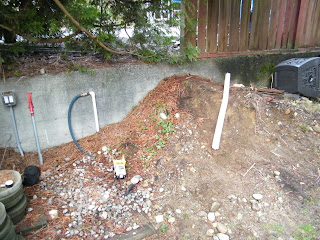 So being awesome, he dug it out and loaded it up in the trailer and went along his merry way. But life being interesting threw a wrench in our plans. Half a dozen blocks from home the trailer the axle broke. Seem this is an integral part. So using his superpowers he got the lumbering trailer to the side of the road, where it sat for the night. It was too late in the day to rent a truck, and we couldn’t get a hold of our trailer loving friends. So the project came to a screeching halt. 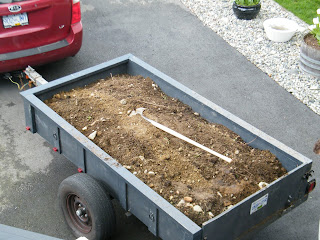 With new motivation (getting the trailer off the road and all) he set off at the insane hour of 7am to pick up the rented truck. The first load of dirt (the trailer’s load) was weighed in at the landscaping store, and came in at over 3000 lbs. Um, yeah, the trailer was so not rated to carry that type of weight. No wonder it broke.

After coming back for the remaining dirt and hauling it off, the combined weight was totaled at 12540 lbs. He then fashioned a fix, and limped home the poor misused trailer. 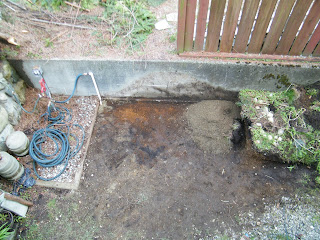 By this point I was feeling no better (in fact it got a lot worse before it got better) but I was still feeling well enough to offer some helpful remarks to my husband. Down below he was making the ludicrous claim that he could move the shed all by himself into into new position. For this he got rolling laughter in return. Crazy husband! It took three men to get it out of the store! 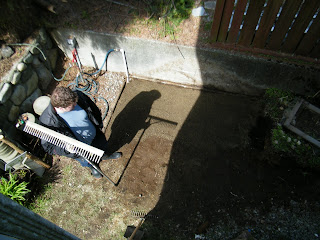 So he went about proving me wrong. It’s days like that one that remind me how smart he actually is. His brain had already calculated a plan, while I was mocking him from above. His plan was brilliant.

Down went the boards (I guess it’s time to stop bugging him to get rid of all of the random timber he stores.) 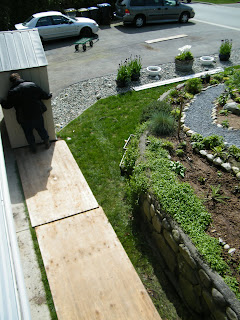 It took minutes. Now finally the tools can stop being randomly stored on the patio. The lawnmower will have it’s home. Yay storage! 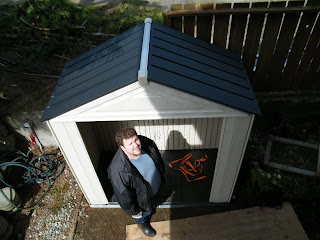 There is still a few dirt piles on the side. Mostly what remains is topsoil, and can be easily dispersed around the gardens. There’s still lots of work to do on the side, but it all becomes a little easier with the shed storing all the tools we need to get the job done. 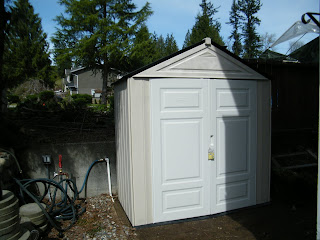 None of this would have been done without my husband tireless labour. There I thought he was crazy, instead I’m reminded he’s a genius. There not that far apart, after all.

This entry was posted in Front Garden, Reasons why I love my Husband. Bookmark the permalink.

6 comments on “My crazy husband, he’s a genius!”